Discovery of the Upper Lip Tie 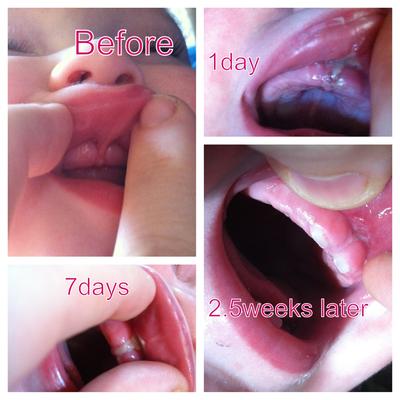 before/2.5 weeks after photo of 2 year old

When my youngest daughter was 8 months old I discovered, through my 2 year old’s speech therapist, that both my younger two daughters had upper lip ties. This area of the mouth is called the frenulum labii superioris and it is an area I had never heard of being an issue. I was well versed in tongue ties, having known plenty of people whose infants had them- some of which pursued having it clipped while others worked with a lactation consultant to have the latch corrected and left the tie intact. This issue with a lip tie was knew to me, though, and it got the wheels in my mind churning about breastfeeding.

Grace was already 8 months old at this point and she was growing and thriving on an exclusively breastfed diet (with a few solids beginning to be thrown in the mix now). Nursing was not excruciating and if her latch was shallow, it was not shallow enough to cause any real pain for me or prevent her from receiving a sufficient supply of milk. Yet, I could not help but think about how whenever she nursed for an extended period of time, there was pain. I would get sharp pains after ten minutes of nursing on one side. I always excused it as her latch getting lazy as she drifted to sleep and I changed sides frequently to be comfortable.

I studied for a couple weeks and spent many hours on the phone with dentists, ENT’s, and other pediatric specialists. In the end, We chose to have a laser frenectomy done to release her lip.
Since having had the procedure done, many parents have contacted me asking why I chose to have the procedure done, where I went, why I went there, how it was done, and an array of other questions. Here is some of the info I gathered in my time on lip ties and the frenectomy procedure.

What is a Lip Tie?
A lip tie is when the lip is attached to the gums. This can really range in severity and there are degree’s that define how severe of a lip tie it is. It is really common for people to have some kind of lip tie but only when it is severe or causing medical issues (or for older, consenting aged people, perhaps cosmetic issues that they want corrected) does it need to be corrected.

What problems can it cause?
Problems are mostly seen by the breastfeeding mom. A severe upper lip tie can cause a shallow latch, the inability to flail lip out adequately (incorrect latch), slow growth (due to poor nursing), and pain for the mom while nursing. In addition to this, it can cause a severe gap between the front teeth when the tie comes down between them, tooth decay in the front teeth, speech difficulties from the limited mobility of the upper lip, and problems with it tearing and causing pain in rough play or accidents.

What is a Frenectomy?
A frenectomy is the procedure done to correct a lip or tongue tie. Many of you may already be familiar with it from tongue ties but for an upper lip tie it can be a bit more than the “snip” we think of for the tongue tie, especially for the most severe degree where it goes into the palate of the gums. There are two ways a frenectomy can be performed and for young children, most dentists are more comfortable with the scalpel method. When using a scalpel, the procedure is commonly performed in a hospital and the child undergoes anesthesia. The tie is cut out and stitches are used to mend the area back together. Then there is the laser frenectomy (this is what my daughters had done). For the laser procedure the child is just numbed in the area, no anesthesia. The procedure can be done right in the doctors office in under 10 minutes. It is a less painful procedure and easier to recover from and does not leave behind the scar tissue that the scalpel version can cause.

Where Do you go for a Laser Frenectomy?
This is the hard part. Many doctors are not practiced at using a laser on a small, awake child and fear its safety level. I started reading the articles by Dr. Kotlow in Albany, NY who has been doing laser frenectomy on children from infancy through their teen years with no complications and decided I felt confident that it could be safely done. While there are other practices all around the country that perform the laser procedure for young kids, they need to be searched for. His office is very friendly and they are willing to give advice and recommend doctors they know from around the country if his office is out of reach.

Do all Upper Lip Ties need to be corrected?
No. Many people have some degree of a lip tie and it does not cause any problems. The only time it is a concern is when it is causing breastfeeding difficulties or, later on if it is causing other issues. If a newborn has an upper lip tie but mom is experiencing no breastfeeding difficulties and they are growing well, there is no reason to rush out for medical intervention. A frenectomy can be performed at any age so it is fine to wait and just see how it plays out for the child and leave it be if it causes no problems for them. Also, if an infant is experiencing breastfeeding issues, it is always recommended to try working out their latch with an IBCLC first, as it is never pleasant for the parents or baby to go through medical procedures if it is not necessary. /tmp/thumb_photo-55.JPG

My daughters both had the frenectomy performed a month ago and are doing incredibly well. The first week following was harder and they were uncomfortable but healing went well and they were able to eat (and nurse) fantastically. Since having the frenectomy done, I have not experienced pain or discomfort while nursing Grace even once (and I have left her on to nurse in her sleep for long periods of time). Her lip flails out while nursing when it never could before and while it was never horribly uncomfortable to nurse her before, it is 100 times more comfortable to nurse her now.

Please note, this info is based on my own research and experience as a mother who has been through this procedure with my children, and I am not a medical professional


Bess Bedell is a wife and mom to three girls. She is an activist for breastfeeding, keeping boys intact, healthy living and all around attachment parenting. She is the author of the blog www.awarriormom.com

Join in and write your own page! It's easy to do. How?
Simply click here to return to Guest Articles.